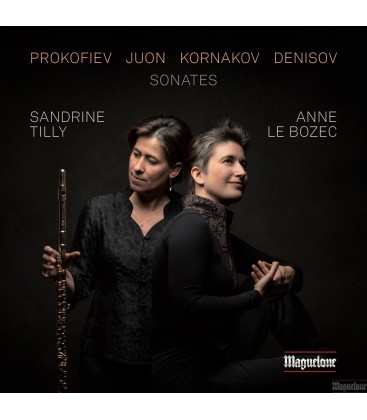 For a musician, encountering a composer's work or a certain part of the repertoire may come at a time more or less favourable to the understanding of the music in question. It really doesn't matter: "You have to start them early",  said Pablo Casals of the mighty works that impudent youths tackled with gusto. A work absorbed in this way, continues its underground route over the years before emerging at the appropriate time, and obviously and ingenuously declaring: "I'm here! Have you been expecting me?"

Sandrine Tilly and Anne Le Bozec were 18 and 17 when they devoured the Prokofiev Sonata, convinced that they had not overlooked a single crumb. At the time, this work owed its existence to the enthusiasm they devoted to it, and the energy and feeling they offered. With the passage of time, Sandrine's path has led her to a thorough study of the vast repertoire of Russian orchestral music under the guidance of one of its most talented representatives, Tugan Sokhiev, whilst through the Art Song repertoire, Anne has explored Slavic poetry set to music. The works discovered when young assume new depth within this vast contextualisation, yet without losing their own identity: the Russian language aside, our two musicians remain French and European, and this meeting of cultures can prove uniquely fruitful.

During their studies, two scores lay dormant on the piano whilst the Prokofiev Sonata raged:  those of Paul Juon and Edison Denisov. Upon awakening, these sleeping beauties reclaimed a place that appeared to have always been theirs: one, due to its blend of German and Russian influences, the other for its radicalism and visionary nature. To this surprisingly complementary triptych it seemed perfectly natural to add the Sonata by Yuri Kornakov included in this programme, one infused with the influence of Shostakovich. When the time is ripe, the music chosen for a recording comes naturally.

Russian sonatas for flute and piano