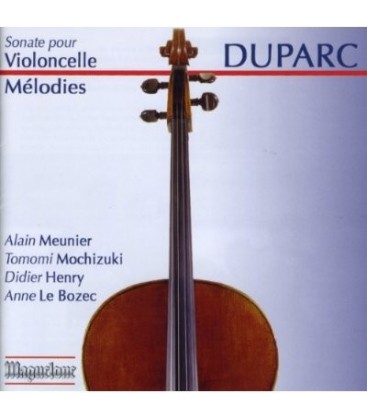 The destiny of Henri Duparc is one of the most tragic in musical his- tory. An extremely gifted young man, he initially composed a few pieces for piano, the Sonata for Piano and cello and some mélodies. He received his only musical training as one of César Franck’s first students. In 1870, at the age of twenty-two he composed L’invitation au voyage, which would earn him lasting international renown.

Over the following fourteen years he would compose only nine other melodies as
he was plagued by an obsessive neurosis which caused him to constantly and cruelly doubt his creative abilities. During this same period, he worked on an opera (La Roussalka, based on a work Pushkin), which he destroyed and recreated on several occasions before ultimately condemning
it to the flames. All that remains of this auto-da-fé is a brief instrumental prelude entitled Danse lente. A final melody, Recueillement (a setting of a poem by Baudelaire), met with the same fate as the opera, yet in this case not a note survived although existing correspondence attests that the work was completed.

For the long half-century beginning in 1884, Duparc’s existence was a miserable one. Not in material terms, as he was a bourgeois of independent means, but his torturous creative angst soon attacked his body, provoking a gradual loss of sight and paralysis of the lower limbs. He tried numerous cures, moved to Switzerland and the South of France, developed a strange religious mysticism, and yet nothing could appease the torment he endured for fifty years – that of a composer deprived of music.

Both the religious bent and the obsessive neurosis (which Freud described as a sort
of “private religion”) are related to his creative block. Throughout his life, Duparc was obsessed
by an ideal of “purity” which contradicted his attraction to the “impurity” of a type of music he conceived as closely connected to a poetic text, and one always inspired by human love at its most painful, emotional or even carnal. In the grips of this tension he continued to systematically destroy all he created, and confessed that he would have annihilated the little that survived had the works not existed in published form. This was a long-standing fantasy as he had already withdrawn from publication his first five melodies (Chanson triste, Soupir, Romance de Mignon, Le Galop, Sérénade), composed before the age of twenty-one. This first collection would have been lost forever had not a handful of copies escaped his merciless self-criticism.The very title of his last finished work, La Vie antérieure (The Former Life), disturbingly echoes something he wrote much later to his friend and disciple Jean Cras: “My artistic life is over;

it has been replaced by a totally inner life which is better, and leaves nothing of the former but the memory of an already distant past: That is where I lived”. The last phrase, taken from a poem by Baudelaire, indicates that his inner, religion-inspired life now mattered more than a former – and henceforth “prohibited” – artistic life.

These psychological problems stem from earlier traumas which would take too long
to relate here, but which I have attempted to elucidate in my book. What most concerns listeners to Duparc’s music is the notion of inner conflict, in as much as it forms the basis for the emotions involved. This may manifest itself in the aspects I have mentioned (present/past, pure/impure) but
is also discernible in more immediately accessible stylistic issues. For a long time, and quite justifi- ably, Duparc’s melodies have been seen as largely diverging from the French genre practiced by his contemporaries Gounod and Fauré (and later Debussy and Ravel) and aesthetically closer to Ger- man lieder. This is validated by his strong musical tastes – his gods being Wagner and Beethoven, reflections of his predilection for German musical romanticism. However, as of the 1870 war, he developed a feeling of intense nationalism which only increased with the First World War. Here then is another conflictual aspect of his creative process which is perceptible in his finest melodies (Phidylé, La Vie antérieure) before it too is consumed by circumstances.

The artistic and psychological environment I have outlined clearly demonstrates the exceptional power of emotions undergone by the composer and experienced by the listener. I consider this more relevant than a detailed description of the works featured on this recording. The dates suffice to situate these works within the framework of Duparc’s creative evolution. For example, this way it is easier to understand why Chanson triste and Soupir were revised for the only “definitive” publication of the 1902 collection (a mere thirteen melodies) with slight changes which enhance the melancholy compared to the first, already polished version. We also see why, at the other end of the spectrum, La Vie antérieur, in comparison with all that precedes it, reaches a summit of impassable perfection wherein the emotional weight of the poem’s last words, “ ...

le secret douloureux qui me faisait languir” (“...the painful secret which makes me suffer”), lead to one of the most beautiful piano postludes ever imagined: music without words, “pure” music pouring forth before the ultimate silence.