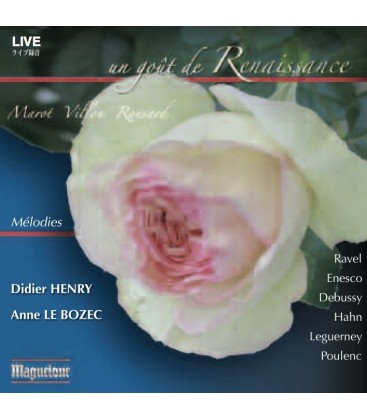 Melodies to Renaissance writers: Marot, Villon, Ronsard, Charles of Orleans ... -Enesco: 7 poems of Clement Marot - Ravel: two epigrams by Clement Marot - Hahn: 2poems of Charles d'Orleans - Debussy: 3 Fance songs; 3 Ballades of Villon -Leguerney: 3 poems of Ronsard - Poulenc: 5 poems of RonsardThe finding does justice neither to Berlioz the precursor nor the composers of vocal music today. It reflects a kind of unconscious nostalgia: to evoke the French melody,this is a reference to its heyday, about a century, the mid-nineteenth to 1960. Inspiredby the boom and the multiplicity of poetic currents of this period, most composers fortheir melodies to choose the poems of their contemporaries, Hugo, Baudelaire,Verlaine, Eluard and many others.

Less common are meetings of the kind of melodic and poetic tradition oldest French.Hahn first, then Debussy, Ravel and Enesco, Poulenc and still Leguerney and were pleased to step over time and to give life to a few sound lyrical masterpieces of the late Middle Ages and Renaissance. The poems selected for the melodies are oftendedicated to the woman, lover, mother or even mere gossip street. It was theirinspiration to all, Ronsard and Marot, Villon and Charles d'Orleans, as the sonnet andhave strenna vocation to sing the flame of love even in its most extreme shades: bitterness, resentment, irony, waiting, gouaillerie, gambling fellow, are also present as tenderness, courtesy and the evocation of happiness.