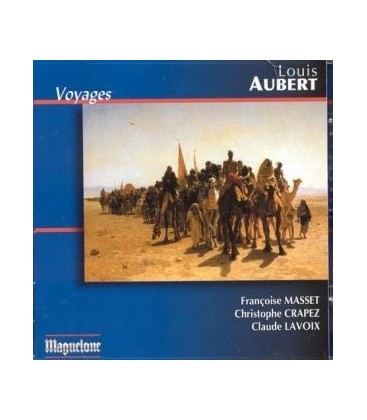 Apart from ignorance, nothing can explain the unwarranted oblivion into which the music of Louis Aubert has descended. Anyone who has heard Poèmes Arabes, Les Sillages, or the Habanera can only be enchanted by music which is exceptional, refined, typically French but also wholly distinctive.

Louis Aubert was born in Paramé ( Ille-et-Vilaine ) in 1877, and swiftly displayed the musical talents which would enable him to enter the conservatoire in 1889. There he studied with Lavignac, Diémer, Vidal, and from 1893 in Gabriel Fauré’s composition class. His fellow students included Maurice Ravel, Florent Schmitt, Roger Ducasse, Charles Kœchlin and Georges Enesco. At the same time, Aubert studied classics at the Sainte-Croix College in Neuilly.
During these early years he also enjoyed a career as a singer: “I had quite a wide ranged soprano voice which led me to sing as soloist in various churches, particularly at the Madeleine and La Trinité. It was at the Madeleine that I first saw the admirable master who would definitively chart the course of my career: Gabriel Fauré. He was conductor of the Madeleine choir at that time”. Thus, Aubert became the first to sing the Pie Jesu from Fauré’s “Requiem”. He was also an excellent pianist who took part concerts of chamber music, and whom his friend Maurice Ravel called upon for the first performance of his “Valses Nobles et Sentimentales” which are dedicated to him (1911). His marriage in 1901 made it impossible for him to enter for the Prix de Rome. From that time onwards he divided his time between the occupations of composer, music critic  (for Le Journal, Opéra), and teacher (his students would include Pierre-Octave Ferroud, Maurice Jarre, Henry Barraud, Ray Ventura).
His musical output, greatly influenced by Fauré and later Debussy, is somewhat sparse, consisting primarily of melodies, piano pieces, symphonic poems, an opera and two ballets. It took Aubert some time to find his veritable style. As Vladimir Jankélévitch said of him: “before becoming his true self, he went through the inevitable period of experimentation... A lengthy journey separates Rimes Tendres in 1897 from the intense passion of Poèmes Arabes!” However, before reaching the pinnacle of the six Poèmes Arabes (1917), the composer’s itinerary takes in the lyric tale La Forêt Bleue, an opera begun 1904 first performed in Boston in 1913 and presented to the audiences of the Opéra-Comique in 1924. The works which followed are increasingly personal in character: the song cycle Crépuscules d’Automne (1908), Nuit Mauresque (1911), the triptych for piano Sillages (1911), and the three melodies Aigues Marines, De Ceylan and Au Pays (1917-1920). In 1919 he composed the Habanera, the symphonic poem his contemporaries considered to be his masterpiece, and which enjoyed enormous popularity - it is undoubtedly his most performed work.
The melody genre gave way to a more popular song style with La Mauvaise Prière (1932), La Berceuse du Marin (1933), Tendresse (1934), and Trois Chansons Françaises (1940). From that time, Aubert expressed himself though the orchestra: Dryade (1924), originally written to accompany the film by Dudley Murphy, Caprice for violin and orchestra (1925), Feuilles d’Images (1932), Le Tombeau de Chateaubriand (1948), and the ballet Cinéma (1958). Aubert was elected to the prestigious Institut de France in 1956, and yet at his death in Paris in 1968 he was virtually forgotten by all.
The subjects that fascinated him were the same as those of his contemporaries: childhood, the night, the sea, and travel. Thus his pen would produce “the nimble scurry of imps” (Jankélévitch): the enchanted world of the La Forêt Bleue, a lyric tale which brings together Tom Thumb, Little Red Riding Hood and Sleeping Beauty; “the humour, exuberance, breeziness, and ravishing lightness” of the five childhood pieces “Feuilles d’images” (initially for four-handed piano, then superbly orchestrated by the composer) wherein he invites us to explore his magical world. It is also thus in the joyful, carefree Chanson de route, which takes us to exotic lands evocative of Spain; with the bursting, flamboyant colours of the Sérénade, and the weary rhythm of a sensuous habanera in Des Pays Lointains.
Aubert is also a nostalgic composer who seems to reject the notion of the passing of time - almost all his works reflect this unrest. Thus, he revels in Dans la nuit, the third piece from Sillages which offers a splendid example of reminiscence (but such is the case with his entire output), where there reappear flashes of the first piece, Sur le rivage and the habanera from “Soccory”. As in a dream, he seems to be inviting us to embark upon distant seas towards new shores, to find Nuit mauresque (Moorish Night) where “night is crafted with a subtle art like a fabulous Boabdil palace” and Rivages lointains (Faraway Shores).
For Louis Aubert is above all a “travel” composer. He takes us to Spain with his habanera rhythm, invites us to follow him to the Orient in Poèmes Arabes and De Ceylan. However, these evocative names should not divert us from his veritable quest, this “elsewhere” is none other than that county “of which no one ever mentions the location, the time, nor the name”, the Pays sans nom (Nameless Land- 1926). Let it be said that Louis Aubert is not only a composer worth discovering but, above all, a composer worth knowing.