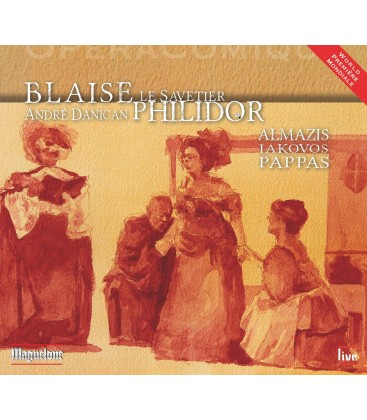 The recording of this outstanding opera took place in September 2013 at the Villa Rose in Malakoff . It has indeed seemed important to make the spiciness of the text and the particular dynamics of this music to avoid the usual division of the recording studio and enjoy the special energy that gives the presence of an accomplice public .

Almazis - Iakovos Pappas, for fifteen years , is dedicated to defend and publicize the French comic opera , with an absolutely unconventional musical approach . This last project in perfectly against current assumed , has assembled a team of outstanding artists :

We can even say that with their chief work Danican André Philidor and Michel- Jean Sedaine will source and model for all subsequent comic books and this must be understood in its widest historical sense. Almost geometric perfection and deep maturity of the work can only make a lasting astonishment.

This comic opera in one act, performed for the first time at the Foire Saint -Germain March 9, 1759 is the first composer and already this particular bill which expresses the combinatorial intelligence and dynamic individual to his style .

Inspired by a fairy fountain , it features a friendly and broke couple ( Blaise , cobbler more focused on the cabaret on the shoe, its energetic woman more aware of reality) , harassed by a couple of owners. The owner tries to buy the favors of the young man , while her husband tries to seduce his wife without knowing that they are the objects of a scheme hatched by Blaise and Blaisine .


According to Julian Rushton composition combines good shot with the usual flair Philidor for writing tunes together forming a great farce. Stylized laughter , tears and trembling anticipate subsequent parts onomatopoeia effects , and characterization , if it is simple , is already fine .
Daniel Heartz wrote that " the forces of art Philidor are already fully apparent in Blaise . Its ability to characterize the different personalities or actions simultaneously represents a breakthrough in the opera, and not only in France . "
André Grétry said Philidor was the first to create sets with contrasting rhythms , and that nothing like this had been heard in Italian theaters (where Grétry had studied in the 1760s ) . He attributes the ability Philidor produce these complex amalgam by his mastery of chess and Philidor class at Gluck " by the strength of the harmonic expression."