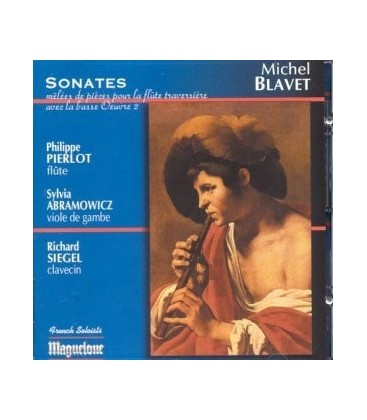 Recorded on a wooden flute, we discover this album with new ears.

The writings of the era still speak with admiration of Blavet. He is regarded as an exceptional musician, a composer of great talent, playing the perfection of hisinstrument (and bassoon) with great ease and virtuosity. He is also respected for the purity of his morals, his manners, his honesty, his modesty and unselfishness. It wasalso noticed by the fact that he willingly played the compositions of others. For Neufchateau wrote: "We do not even suspect the perfection of which this instrumentwas capable and he was indebted to Mr. Blavet. This illustrious musician was able toget all agreements in the most pleasant in his sonatas and concertos, with anexecution clear and rapid, accurate and brilliant, that nobody had given the idea. in a word, the sounds of the flute became, under his fingers, the perfect imitation of a beautiful voice and charm of sensitive ears . ". The works of Blavet are, according tomany musicians and historians, masterpieces, sonatas in which "we find melodies of incomparable charm," and it is strange not to hear more often in concert.