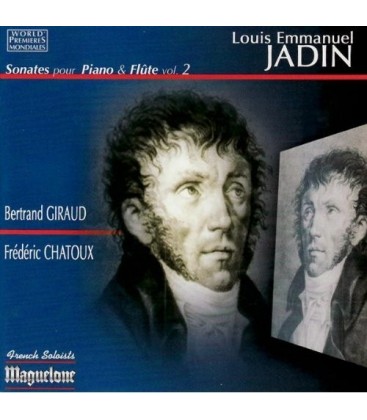 Frederic Chatoux, flute - Bertrand Giraud, piano Jadin - The Complete Sonatas forFlute and Piano vol.2 - After the successful first volume with other 4-star ebtre WorldMusic, this is the second volume containing the three sonatas of OpusXIII and the Sonata in D Major.﻿

This cycle of eight sonatas for piano and flute, presented here in two volumes (Vol. 1:Opus X and G major sonata without opus / Vol 2: XIII opus and sonata in D major,without opus), is part of the work Louis Emmanuel Jadin.Né fruitful in VersaillesSeptember 22, 1768, he lived 85 years. In addition to its teaching piano and music theory to young Paris Conservatory, he composed forty operas and comic operas, symphonies, numerous pieces for harpsichord or fortepiano, songs, patriotic songs, military marches so ... and 8 sonatas for piano, flute and flute basse.La not only to cue(as might suggest the title "piano accompaniment of flute") but becomes the intimateconfidante in a dialogue with the piano which is full of feelings. We spend in each of the eight sonatas of elegance, refinement, sometimes a little old fashioned, the lyrical and passionate ardor of a nascent pre-romanticism.﻿﻿