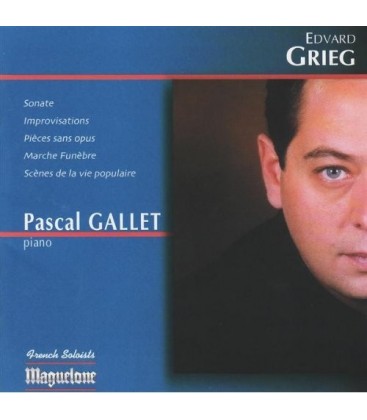 Pascal Gallet beautifully reveals the soul of Norway through this recital﻿.

There are two reasons why Grieg focused on smaller formats after having sampled the sonata form: firstly he was not at ease with the development and technique which bridled his poetic and imaginative flights; secondly, the variations genre in which he flourished was better suited to “folk” material with its short phrases which are repeated and juxtaposed, but never reach the development stage. It is perhaps also a Norwegian cultural characteristic, as this letter from the composer to his publisher in 1889 indicates: "We are the Germans of the North, and like all theGermanic people we have strong propensity for melancholy and reverie. But we have always loved clarity and precision; even our everyday language is clear and concise. We also seek to attain this clarity and precision in our art."The use of popular traditional material was relatively new in Grieg’s time. The major ethnomusicalogical collecting work, as carried out by Bartok and Kodaly for example, had not yet begun.  However, almost everywhere, one sought to move closer to truly national, indeed regional music. Extremely diverse composers were working in this same direction; composers such as d’Indy in France, Balakirev and his group in Russia, and obviously Liszt with his treatment of Hungarian music (Grieg was a great admirer of Liszt, whose support meant a great deal to the Norwegian).﻿