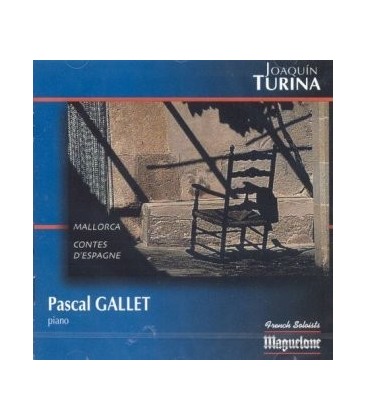 The contemporary view of Spanish composer Joaquín Turina is obscured by his historical situation: How could another champion of universally-appealing Spanish music gain recognition after the monumental success of Albeniz’s Iberia? How could he avoid unfair comparison with the fascinating personality oh his own close friend, Manuel de Falla? The international success enjoyed by de Falla, and the exposure he gained first outside and then inside Spain, long overshadowed the achievements of Joaquín Turina, remembered only because of two or three works that had remained in the repertory. Fortunately, several neglected masterpieces are now being brought to light, in particular among the piano works.
A comparison between the two almost contemporary Andalusian composers, whose paths often crossed and who remained lifelong friends, is as inevitable as it is unflattering for Joaquín Turina. They were, however, born in different cities, a fact that in itself perhaps explains their dissimilarity. Manuel de Falla was born in Cadix, a seaport facing the Atlantic ocean and the American conquests of Columbus, a place of infinite horizons. Turina was born in Seville, a sparkling Andalusian city firmly anchored in the landscape, a mythical city that, in the years leading up to Joaquín Turina‘s birth, was visited by Emmanuel Chabrier, the French musician with the deepest affinity for Spain. Chabrier immersed himself in malagueñas, tangos, and seguedillas, and only dragged himself away from the bailes flamencos in order to climb the steps of the Giralda (as close as he could get to the bells) to contemplate “el panorama de toda la ciudad, con claro de luna, muy blanca, como en la nieve, une maravilla, verdad !”.