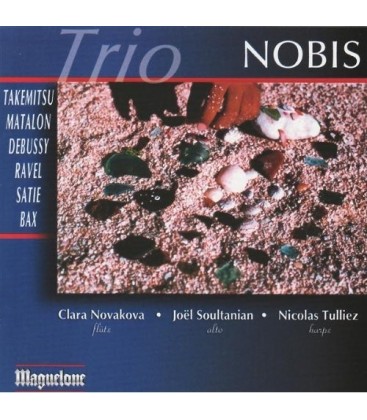 Work written in 2001 for the Trio Nobis and dedicated to his harpist, Nicolas Tulliez, Formas de arena of Martin Matalon (born 1958), consists of four linked movements.The first, which develops around the alto flute, consists of a frame of a transparent and an aerial character. The material of the flute gives rise to rapid back and forth between the three protagonists. They establish complex links by weaving a kind of "mobile" ethereal where instruments are engaged in a mutual and constant reinterpretation. It ranges from literal imitation, echo, referring to the freer, the game of distorting mirror whose reflection is blurred by the many changes of color.

The second movement is to design simpler but equally effective. The viola overheating - the score indicates "popping sound" - it arises in a rattling noise ("galvanizing" obtained with the pedals of the harp) by launching a frantic movement forward which involved the flute, which draws in broad strokes lines comparable to those seen electric son of a train going at full speed. Once the movement falters ever so slightly, he returns to the metallic clatter of the harp, which sends calls and chants relentlessly throughout the movement.
The kinetic energy dissipated, the rhythmic impulse is received, the next move by the three times a playful waltz, where instruments are intertwined in unpredictable phrasing ...

Finally, of a more ethereal, the last movement showcases the harp. This sets the scene by providing a gentle rocking and throbbing and building evanescent figures and a lot of freedom. The other two partners develop and corroborate these figures by giving them sometimes by sound effects and game modes (glissandi of the nail or finger, zinc rope, for harp and pizzicato tongue ram for the flute), color and character.The trio ends elsewhere in the pure game mode: the wind of the flute, viola and harmonic resonance of the harp.
It is this latter movement that inspired the title of the work.


"If I think a combination of flute, viola and harp," Takemitsu wrote about his work And then, I Knew It Was wind, "what comes to mind is the realization that Debussy sonata in late his life. And of course, while I was composing this piece, I had often led. Insofar as the development of my music was influenced by Debussy, the piece is an expression of my respect for this great pioneer. But at the same time, I wanted to expose my own musical world by being different from Debussy. "

The homage to Debussy is explicit, and is manifested in the form of citations, those first few sentences of harp and viola of his Sonata. Inclusion of musical material that makes it indissoluble kinship between the two creators and two works.﻿﻿