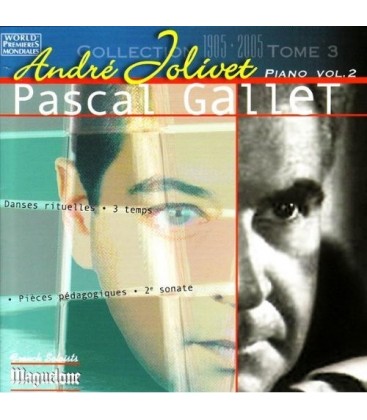 This second volume devoted to piano works by Jolivet can discover a personality of a composer whose unconventional principle perhaps the most fundamental was, throughout his life, never to be hampered by any system. Far, therefore, of any faith, it is a compositional technique that rapidly changing world unveiled throughout this disc, giving rise to a set varies, without ever be heterogeneous: that the concerns of Jolivet, centered around the sound ("music should be his first") give rise to a treatment that unveils the piano in its various facets and all the possibilities RESONANT timbre of the instrument. So that beyond aesthetic oppositions and techniques specific to various parts of the collection, as far in their issues that may be of the pedagogical and spare parts more "serious" and larger, such as dances Five ritual or the Second Sonata, somewhat attentive listener can recognize style, true composer paste that informs the artist's works in spite of the changes he inflicted on different media and subjects he chooses.

The works presented here pedagogical are representative of numerous possible Jolivet, by turns kind of parts, such as dances (Romanian Dance, Dance Caribbean), the Nativity of the little sweep, the Breton Song for a doll, both LEARNED of naive songs, or pieces of circumstance (such as the first of these songs, ... Watching flies fly or 'Lullaby in a hammock). In formesbreves and easier than writing a big piece of the composer, designed to isolate a limited number of difficulties, these pieces nevertheless hit by their finesse and character heals of their elaboration.﻿﻿