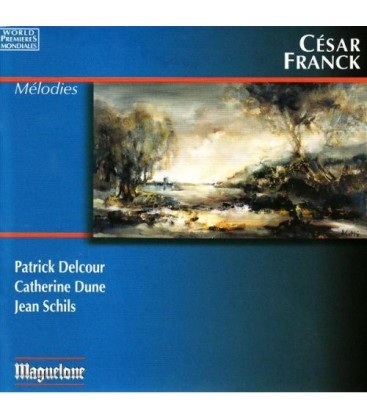 Where would César Franck (1822-1890) stand in the history of music had his output, like that of his disciple Henri Duparc, were limited to a handful of melodies and duets? Not in the forefront, one is tempted to reply. Yet, the question deserves looking into: apart from “Nocturne” and “La Procession” how well do we really know these melodies which have been eclipsed – together with the entirety of his vocal works – by his organ pieces, Quintet, Violin Sonata and his Symphony?  Upon listening to this recording many will experience the surprise of discovering a little known aspect of the composer of “Les Béatitudes”, whose inspiration came not from the angels but rather from the most noble aspirations and romantic ruptures of Victor Hugo.
The published melodies are joined by an important unpublished one, “A cette terre où l’on ploie sa tente” (V. Hugo, 1847), which enhances an ensemble truly representative Franck’s artistic development. It is a romance written at the age of thirteen which represents his debut as a composer. Some fifty-five years later, melodies would mark the penultimate instants of his career.
The people to whom these vocal pieces are dedicated reveal something about the context  in which they were written and performed. The first twelve melodies were intended for the family circle, particularly the woman he referred to as “my dearest cousin”, Claire Brissaud. From 1870, this circle widened as the names of favourite students  (Alexis de Castillon, Albert Cahen°) and performers (Pauline Viardot, Marie Trélat) began to appear beneath the titles. Well before their publication, these melodies became known through as copies were circulated. One of these copies is today preserved at the Royal Library of Brussels, and had originally been offered in 1861 to Cosima von Bülow who greatly appreciated the music’s originality. This gift was not without ulterior motives as Franck hoped to have the pieces  - which he intentionally referred to has his lieder – published in Germany. Eventually, in 1862 the Parisian publisher Richault brought out seven of these first melodies which meant a great deal to Franck, complete with attractive lithographed frontispieces.
The melody genre is the only field in which Franck revealed himself to be a veritable  precursor, together with Gounod and Lalo. He went further than they in absorbing the heritage of Schubert, his favourite composer. He also felt the need to free himself from the strophic formalism of the romantic ballad more strongly and  earlier than they did. In general, Franck illustrates the atmosphere and feeling of a poem rather than dealing with the specific images. This particularity, which is an aspect shared by his melodies and chamber music (emphasised by the cello accompanying the piano in “Le Sylphe”, based on a poem  by Dumas, circa 1845) could result from the fact that Franck left it to his more literary friends and students to chose the texts likely to suit him.﻿