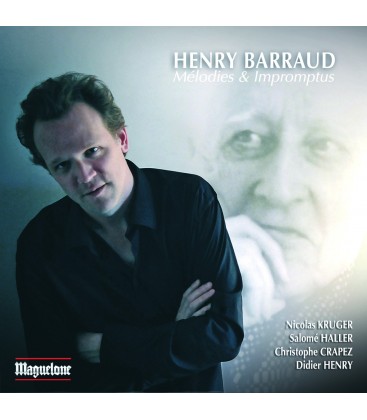 In 2010 Henry Barraud’s “Mémoires” were published by Fayard/BN.

Henry Barraud’s autobiography is the work of a genuine writer and also a chronicle of the 20th century. It con- tains a remarkable wealth of information concerning the cultural life and general history of that era. Throughout his life the author held a number of key positions, particularly as head of the RTF (Radio-télévision Française) and the ORTF (the former French broadcasting service) between 1948 and 1965. Thus, he not participated in but was responsible for some of the most significant artistic events of his time.

On the occasion of this publication, it seems important allow the public to rediscover the music of a man who, despite the weight of his public duties, was primarily a composer. However, he was reluctant to use his position as a means of self-promotion and did little to champion of his own music. Having become a musician myself (the vocation appears to have skipped a generation), I came to appreciate the value of his music and started to play it, every now and then, whenever I could include a piece in a program.

I realised the interest this music aroused as on each occasion members of the audience came to enquire who exactly this Henry Barraud was, and I could reply – with more than I touch of pride – that he was my grandfather!

Known primarily as the composer of symphonic and operatic works, which are ripe for rediscov- ery, Henry Barraud also turned his hand to smaller formations. He was a fervent supporter of the operatic voice, with a particular affection for the alto/mezzo register, and between 1928 and 1945 set down five song cycles for voice and piano which, although his individual style is always recognisable, are extremely varied in character. They range from music at its deepest and most lyrical (“Les Lettres de Mme de Sévigné”) to musical expres- sion stripped bare (“Poèmes de Reverdy”), and even unbridled humour employing the influences of jazz (“Les Chantefleurs-Chantefables”).

The selection of poems was made by a lover of literature who possessed a vast humanist culture (he also set to music Villon, Dante and Cervantes). He made daring choices such as setting to music the famous letters of Madame de Sévigné, a rare and audacious move which proved totally successful, or soliciting the surrealist poets of his time - with a certain predilection for those with strong Christian leanings.

The “Impromptus for Piano” which open this programme were composed in Marseilles in 1941 when Henry Barraud was in la France libre where he took part in the “reconstruction of the so-called national radio”. ﻿

Through the immense variety of tone and character in these works, one perceives the musical construction and qualities associated with a certain idea of French music: a clear musical line, constantly renewed melodic creation, and harmonies which, rather than striking poses, follow the contours of the vocal line and seamlessly﻿ ﻿provide it with colours. This is music which is both shaped by its epoch (Honneger, Jolivet, and Messiaen) and loyal to its heritage (Ravel, Bartok, and Roussel), but incapable of being simply reduced to either of these influences.