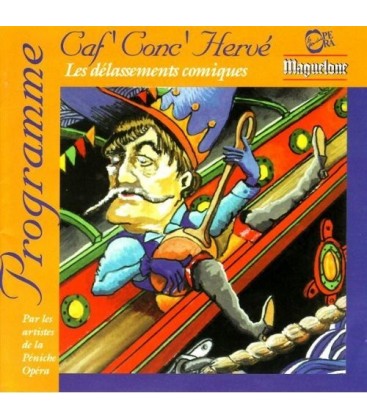 First volume of the series produced in collaboration with the "Barge-Opera", the melodies and satirical songs of Hervé transport us with joy, in good humor, pranks,puns and other jokes. Direct rival of Offenbach, Herve represents a more direct kind ofpopular. For several years the barge Opera "asks," a word dear to its founder, the repertoire of musical theater. Hervé, creator of music therapy, but also of operettamusic hall, was organist at the Chapel of the Bicetre, where he was lodged. His window overlooking the courtyard where the crazy ... which become a subject of inspiration for his inquisitive mind! After composing many operettas, he took almost at birth of the "Cafe Concert". Sketches, skits, songs, burlesque numbers, as many formsdécoiffantes, made ​​of text and music, words and notes, choreography and antics that may surprise more than one, the truculence, the incongruity the zaniness of the remarks. DDD 71:57 / French-English Booklet﻿