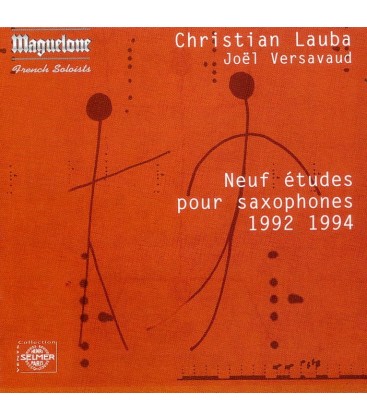 Lauba Christian, born in 1952, won 1st Prize at the International Composition Competition in Berlin. He received numerous commissions of the State andcontemporary music ensembles. His compositions achieve a synthesis of scholarly and popular music. Just as with the piano Chopin, he invented a new languageidiomatic for the instrument of Adolphe Sax. It is played in 'Festival de Radio France,the Concertgebouw and Gaudeamus Festival in Amsterdam, Canargie Hall in New York ... The Nine Etudes for Saxophone present in this recording received the Prix de la SACEM. Dedicatee of a dozen works, Joel Versavaud creates and servescontemporary music with composers such as Berio, Scelsi, Havel ... but also classical: Debussy, Milhaud, Schmitt ... in France and abroad. DDD 47:16 / French-EnglishBooklet﻿