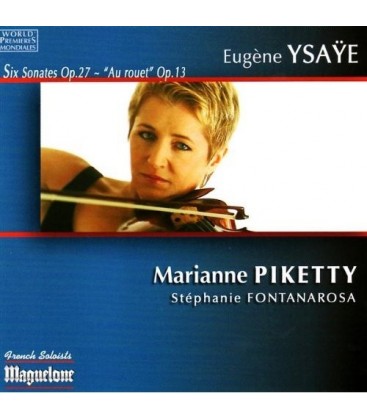 Marianne Piketty gave his first solo concert at the Salle Pleyel in Paris at the age of 7 years. She enters first appointed to the Conservatoire National Superieur de Musique de Paris in classes Pierre Dukan and Jean Hubeau where she won the First Prize in violin and chamber music. It starts to develop in the United States at the Juilliard School in New York with Itzhak Perlman and Dorothy Delay. She then won the contest in New York "Artists International" and made his debut at Carnegie Recital Hall. In France, the Prix de la SACEM awarded him. She became a soloist of the Colburn Foundation in the United States, Action Music Philip Morris and the Yehudi Menuhin Foundation.

Marianne Piketty’s teachers have included Itzhak Perlman and Dorothy Delay and it shows. Not only is she rock-solid both technically and intonationally, but she also produces the most winning, golden-toned legato which forms the bedrock of these absorbing interpretations. Where others tend towards applying lashing of vertical pressure in these inscrutable scores, Piketty cushions any potential percussiveness, ensuring that the music retains a cantabile allure at all times. The one-movement Third Sonata is particularly challenging. Piketty creates the impression of the music having been composed in a single creative sweep, her glowing expressivo ensuring that even the most potentially awkward terrain sounds tonally beguiling. It’s a stunning performance that makes Michael Rabin’s high-octane EMI recording sound hard-driven and inflexible by comparison. Piketty’s account of the sixth sonata, with its wrist-cripping sequences of spiccato, 3rds and 10ths à la Paganini, turns this infamous technique-fest into a poetic outpouring, before a sublime rendering of the Franckian Au Rouet – with pianist Stéphanie Fontanarosa and glowingly recorded – rounds out an outstanding disc.