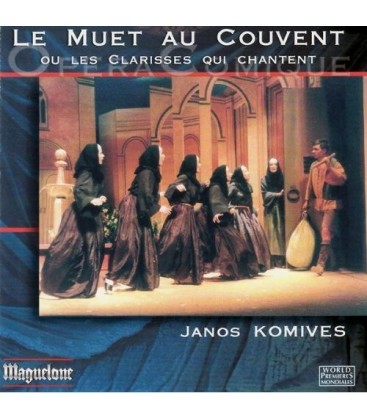 Silent to the Convent"Poor Clares or singing"Lyrical comedy in one act by BoccaccioJanos KomivesARGUMENTOne morning, the peaceful life of a convent of Poor Clares of Tuscany's legendaryTrecento is upset by the arrival of Guido, a tall strong and beautiful - but dumb!The killer smile, he has impressed the nuns, a "letter of recommendation" that boastshis strong body, his health iron, helpful nature and his zest for work. Even his silence, his only weakness, is presented as a virtue, a guarantor of unfailing discretion.Hired on the spot as "factotum", Guido goes to work ... But the temptation to "taste theforbidden fruit of love" is too great for the young nuns can resist: thus, as the mischievous sister spearwort, the innocent sister Pamprinée, the sensual portressEliane, the three sister Althea, Violaine and Snowberry, laughing and brazen, enjoyone after another of the personable and zeal for Guido, filled.But the manly eloquence of silent has its limits. When the Abbess in turn is seeking hisgallant services, Guido confesses his embarrassment by "opening the mouth" ...The disappointment of the Abbess is the measure of his fear of scandal ... Fortunately,the night - and Clare - are consulting. The next day, before all the sisters together, she announced the big news of a "miracle": long silent, Guido has recovered his speech,thanks to the fervent prayers of the nuns. Thus, morality is safe!The real moral of the story, that of Boccaccio, is declined by the "dumb speaking":Fortune favors<span style="color