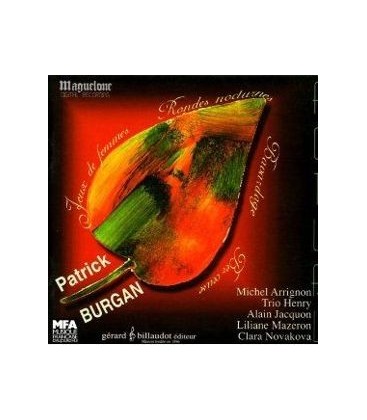 Very young attracted by the composition, it is resolutely committed to this path when the hearing of Varese Arcana and Henri Dutilleux Métaboles him glimpse the expressive resources of a modernity that knows freedom from tradition without himblindly turn their backs.
After a brilliant university course in musicology (first appointed to the CAPES in 1985, named to the second aggregation in 1986), he entered the Conservatoire National Superieur de Musique de Paris where he was in student Ivo Malec, and graduated in 1988 with a first prize of orchestration, and in 1990 the first prize for composition unanimously that opened access to graduate in the class of Grisey.
The same year he received advice from Donatoni at Academia Chigiana in Siena and then did an internship in computer music at IRCAM with Tristan Murail and Philippe Manoury.
Since then, several times winner of the Institute and winner of numerous competitions in composition, he was a resident of the Casa de Velazquez in Madrid from 1992 to 1994, was awarded in November 1996, the Foundation award "Simone and Cino Del Duca "and the Academy of Fine Arts, and in 2000 received the Claude Arrieu of Sacem for its entire production. He is now Associate Professor at the University of Toulouse, where he teaches writing and improvisation.
His works are regularly performed in most European countries, but also in the United States, Canada, South Africa, Indonesia, Japan, etc.. by groups such as the Orchestre National de France, Orchestre Philharmonique de Radio France, the whole Parnassus of New York, all Intercontemporain 2e2m, the Route, The Concert Spiritual, all Clement Janequin, choirs Eric Ericson, Nederlands Kamerkoor, Accentus, The Elements, Musicatreize Young soloists, the Masters of Radio France, Paris, Sottovoce, the National Chamber Choir of Ireland, and soloists such as Nicholas Angelich, Emmanuel Strosser, Winston Choi, Arrignon Michel, Alain Damiens, Michael Bourcier, Philippe Graffin, Alain Meunier, Salome Haller ...
His music is an expressive and sensual character undeniably theatrical, character already present in his instrumental music, quite evident in his voice production (as in "The Lake" which was created at the Theatre du Chatelet by soprano Marilyn Fallot and Orchestre Philharmonique de Radio France under Eliahu Inbal) and of course evident in his lyric:
A first opera, "The source of the Narcissus or heard" a libretto by the poet Marc Blanchet, was produced by all Musicatreize and created in 2000 in Tarbes, Nimes and Marseille in a staging by Peter Barrat and decorations Sir Nicolas.
In May and June 2006, the Theatre du Chatelet, which ensures the creation of his second opera "Peter Pan or the true story of Wendy Moira Angela Darling" in a prestigious cast including Marie-Christine Barrault, Gaële King, Marc Barrard François Piolino, Eric Freulon, the children's choir Sotto voce (direction-Scott Alan Prouty), the Master of Paris (Executive Patrick Marco), the chorus and orchestra under the direction Chatelet music by Claire Gibault; staging and suits accessorized by Isabelle Partiot-Pieri, costumes by Christian Gasc, with the participation of acrobats from the company of Bois-Midi.

Intended for tenor Roberto Alagna, his third opera - according to the "Enigma Variations" by Eric Emmanuel Schmitt - is being written.﻿﻿